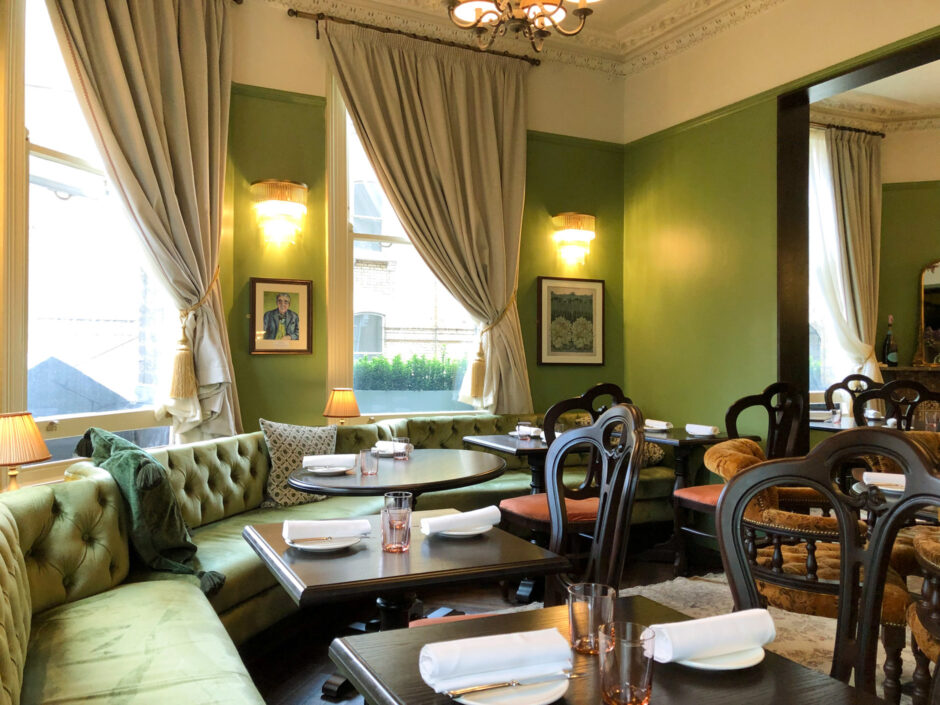 A game of two halves, a tale of two cities, a pub of two floors. Following on from The Cadogan Arms, the seemingly unstoppable JKS Restaurants have opened another corker, working with publican Dominic Jacobs and James Knappett from two Michelin-starred Kitchen Table to revamp The George on Great Portland Street. It has been a two-stage project: first, the ground floor pub re-opened in November 2021, retaining the essence of this Bohemian boozer but with a contemporary edge (i.e. they now serve Negronis); then, the highly-anticipated upper floor dining room opened this year.

Heading up the stairs over the bar you worry this might lead to the living quarters above the Queen Vic. No-one needs a bit of Danny Hand Dryer melodrama over lunch, but there is no need to be concerned. There is an English sparkling wine bar to calm the nerves. Now, like you, I’ve traditionally scoffed at the notion of English sparkling wine, thinking of it as a crude joke to soften the blow of Brexit. But like the trepidation of approaching a Covid jab, it’s not something to be sniffed at. The selection here is impressive and there’s even a Chapel Down set lunch for £35, including a glass of fizz.

Within the 28 cover Victorian dining room the wooden tables have the sturdy stoicism of a Gurkha soldier, the chairs are comfortable and the walls are that elusive shade of green somewhere on the Dulux paint spectrum between ‘Mushy Peas’ and ‘Verdant Meadow.’ On this visit, all diners were enjoying themselves, though the jovial atmosphere was marred slightly by two bellowing media types who were, shall we say, in an advanced state of refreshment. This is after all a pub and not The Ritz.

A whimsically retro canapé for some, but for the self-respecting gourmand devilled eggs are a mandatory order

But the ‘elevated’ pub food and drinks are arguably up there with some of London’s best restaurants. As we sipped on cocktails (for yours truly, the delicious Granny Smith Gimlet), my dining companion clocked the Flor sourdough, which also features at newly-opened (and fantastic) Apricity. My compadre also shortlisted the black pudding Scotch egg as a potential aperitif-accompanying snack. I agreed that any Scotch egg has a natural allure, especially a black pudding one. But all this inane badinage had to cease when I spied the devilled eggs. A whimsically retro canapé for some, but for the self-respecting gourmand devilled eggs are a mandatory order. At The George these hard-boiled beauties, with their exquisite piping of mustardy mayo, espelette pepper and dusting of paprika, are also anointed with a saltire of whole chives. While not satanically spicy, they have sufficient heat to set your palate alive and prepare you for the possibilities ahead.

Onto the meal proper, juniper steelhead smoked trout was a wondrous dish, the fish itself moist, unctuous and flaking like a chronically unavailable acquaintance. On the side, the pickled cucumber salad and dill mayonnaise had an electrifying zing. Whilst I could see the textural rationale of the rye cracker, it tasted like a sheet of plywood. Perhaps its prosaic presence accentuated the positives of the dish, but it would work perfectly well without a piece of IKEA shelving in the way. Meanwhile, the dressed crab served with “classic garnish” took the theory of said garnish but served it more beautifully than we could possibly expect. 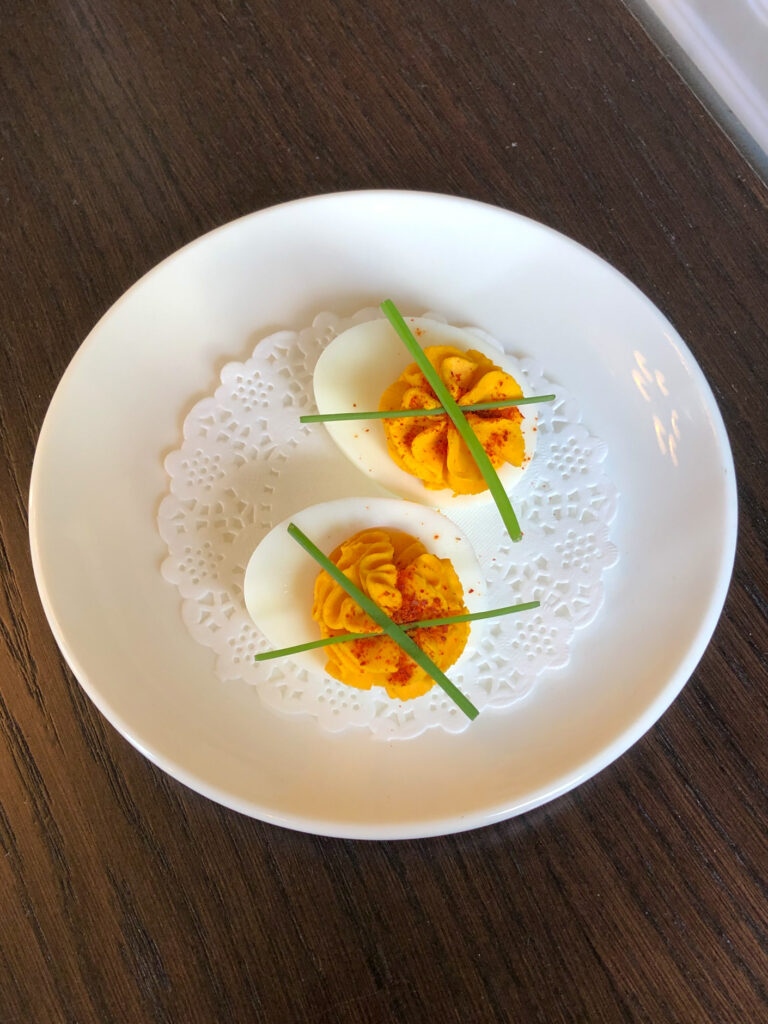 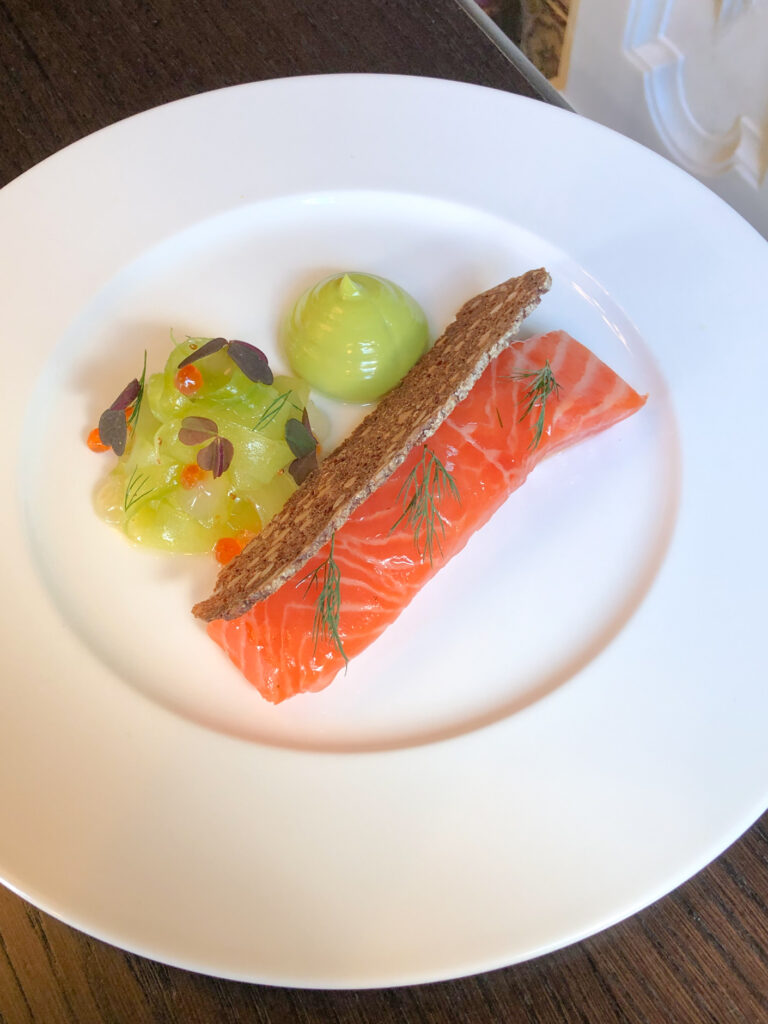 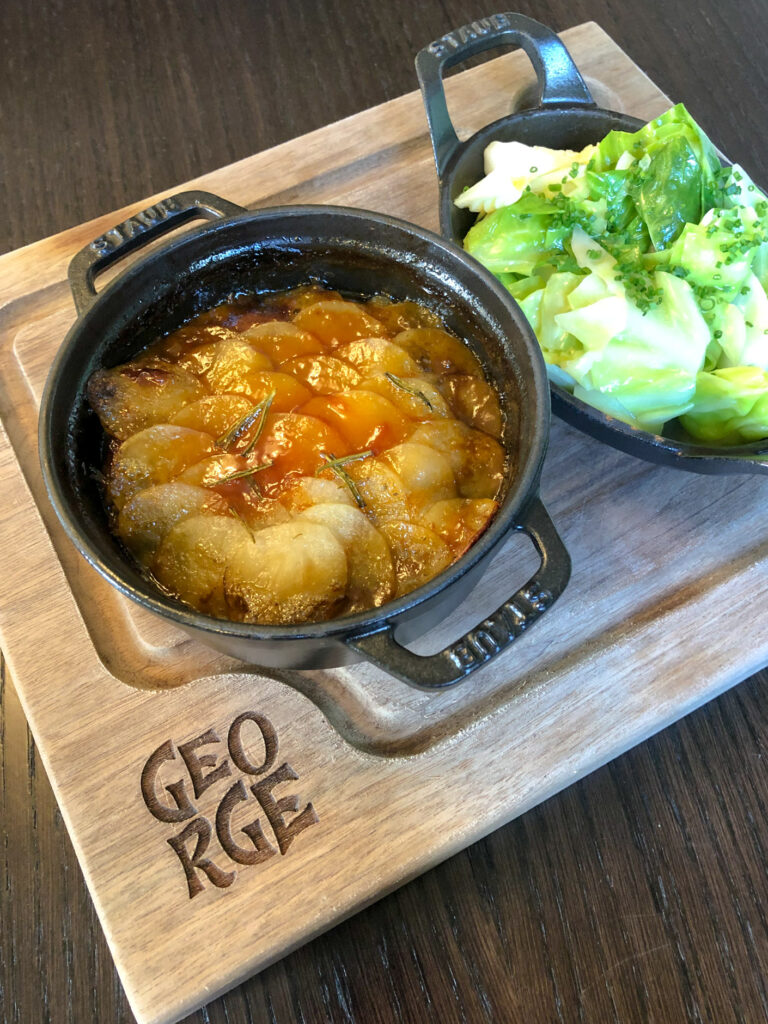 Knappett’s vision soon became clear. He is channelling the comfort pub food of his early career but turning it up to 11. And what is more comforting in these difficult times than a lamb hot pot? Perhaps this wasn’t the most sensible choice on one of those freakishly warm Spring days in London but it would be perfect in the wintry months (when this menu was presumably first devised). The perfume of rosemary, hits of garlic, and unless my mouth deceived me, even the gentle caress of bay leaf, made for an absolutely glorious dish. There was some healthy green stuff on the side too. Apparently it was buttered cabbage but I was too fixated on the hot pot.

Tournedos Rossini is always a risky dish, especially in a pub. The stack of medium rare beef, rösti, foie gras and pool of sticky reduction can promise so much, yet many end up being a damp disappointment. I had the worst of my life at Parker’s Tavern in Cambridge – the meat had been jilted at the altar and the foie gras came as a hard, soulless disc that would find a better home as a new Olympic throwing sport. In the right hands, though, it can be heavenly. Pleasingly, this is the case at The George, where these somewhat controversial ingredients are given an appropriate send-off, complete with a beef fat crouton. Reasonably priced too at £39 (there’s optional truffle for a further 10 quid, bringing it in line with Otto’s).

Desserts are a quintessentially British affair. Although as full as a (devilled) egg, we somehow found space for sticky toffee pudding and rhubarb crumble – and I’m glad we did. These textbook classics were executed perfectly.

Service was prompt, efficient and friendly. The three main servers upstairs all kept a watchful eye on each table to refill emptying glasses, and were knowledgeable and chatty.

And the value seemed fair. The price point is typically Fitzrovian, though £7 for a dollop of vanilla soft serve is a little steep. Indeed, the value issue becomes a bit more questionable over at Knappett’s Kitchen Table a few streets away, where apparently a £300 deposit is required to book as well as a £150 advance contribution, bringing the total meal to around £1000 for two people. His flagship restaurant is undoubtedly brilliant, don’t get me wrong, but with people on the breadline as a result of the current cost of living crisis, or fleeing conflict, there’s a whiff of obscenity about that. A tale of two cities indeed. Overall, I’m much more comfortable about paying £70 or so at The George for next-level pub grub but, as ever, value is relative.