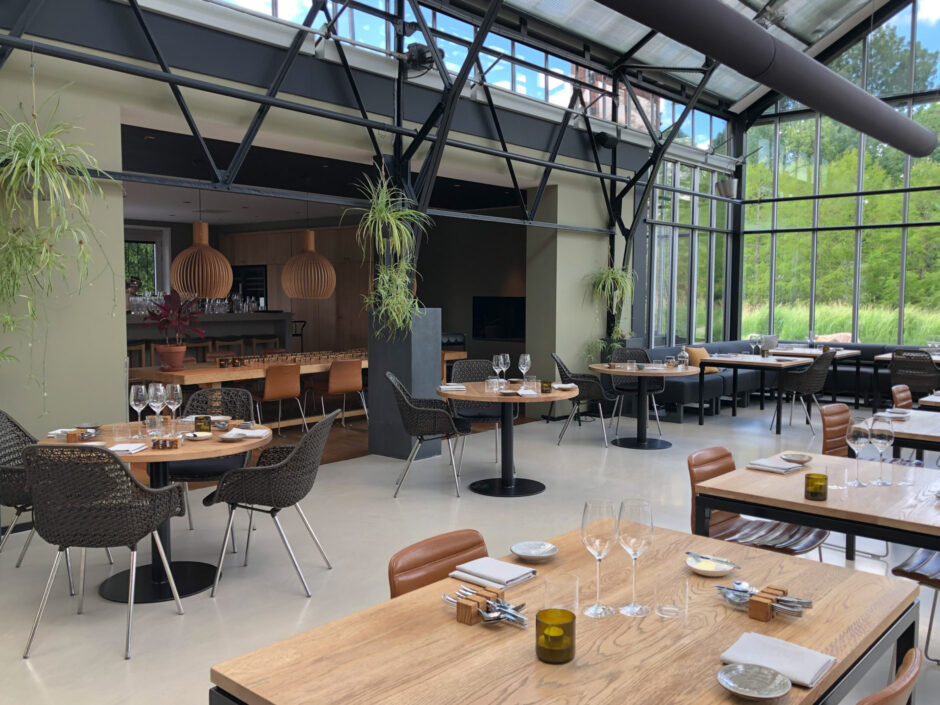 I was originally supposed to go to De Kas in Amsterdam in March 2020 but a certain pandemic put paid to that plan. After an interminable series of delays, I finally got to go two years behind schedule. It was worth the wait.

I don’t usually like to pre-judge a restaurant by other reviews or PR fluff. I’d already clocked De Kas’ Green Michelin star in my due diligence, and it has built a great reputation since 2001, but in this case it was a friendly Uber driver called Edwin who set the scene (and you need an Uber really for this part of Amsterdam – a city I usually get lost in at the best of times, often for bar-related reasons). Edwin asked “have you ever been to De Kas before? If not, you’re in for a treat.” He also earned himself a tip for driving as far as it was possible to go and then giving clear directions for the restaurant. Well, in theory, you can’t miss it as there is only one big greenhouse in the Frankendael park. It’s as conspicuous as a shoebill in a chocolate fountain but geography has never been my strong suit.

After being seated and unnecessary coats removed (it’s a greenhouse after all), the ‘garden to plate’ concept was explained in perfect English. I could hear an internal sigh coming on but this introductory spiel mercifully lacked any evangelism (though they have their own branded tote bag – of course they do). The basic idea is you get what you’re given from whatever they’ve picked from the greenhouse that day, but not in a puritanical you-can’t-get-any-pudding-without-eating-your-vegetables way. This isn’t school, though if I’m to scramble around for any kind of criticism you could argue that this uniform approach comes at the expense of consumer choice. However, you could counter-argue that this means the kitchen is always playing to its strengths and no fig leaf will cover any embarrassment. And perhaps the consumer choice is coming here in the first place, doing your homework and knowing what to expect. A kebab joint it ain’t.

There’s a life-affirming pleasure in eating what you know is good for you, beaming as you sip Pinot Noir in a sunlit glasshouse, being literally full of beans

The whole primacy of the vegetable thing isn’t exactly new either, so shouldn’t be a shock to the unwary. Ever since Alain Passard’s légume epiphany in 2001, around the same time De Kas was established, many classically-trained chefs have been relegating meat to a walk-on role or cancelling it altogether. Many are doing it very well (Apricity in London, for instance). 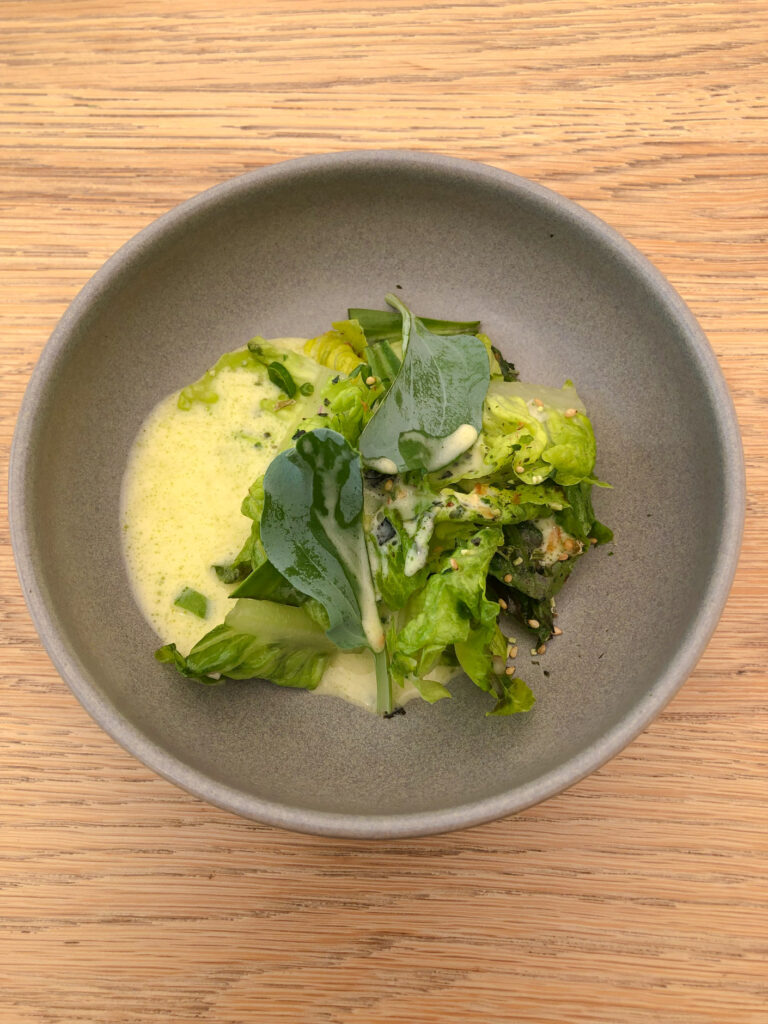 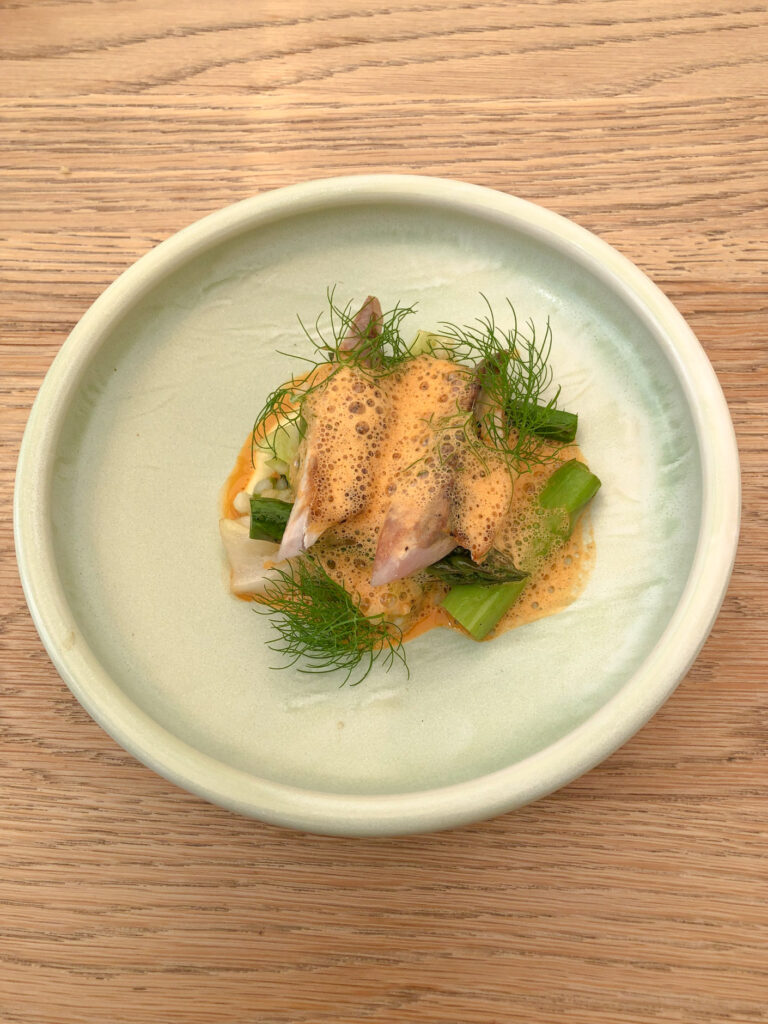 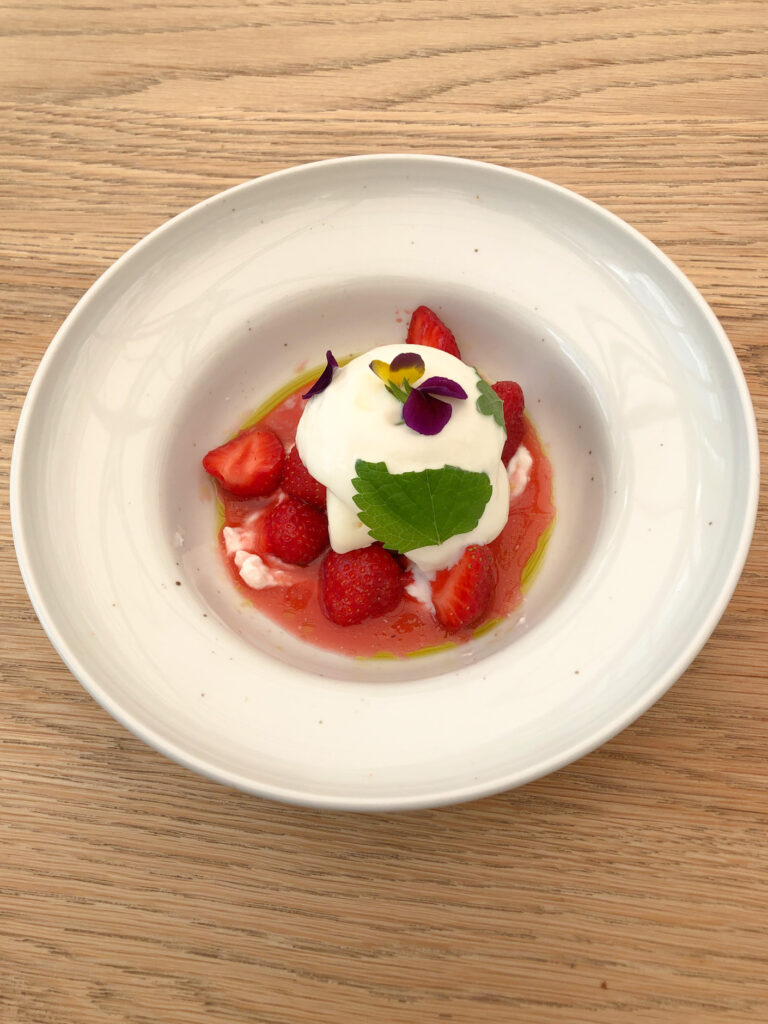 At De Kas in Amsterdam even the most ardent meat lover will be converted by the end. There are slight flirtations with things that could once breathe or had a pulse, but they are cleverly executed. Take for example the beguiling starter of little gem, oyster and various sea vegetables. There wasn’t actually any oyster in it, just an oyster-flavoured emulsion. But what an emulsion, its salty tang being the perfect coating for the array of leaves. Meanwhile, a main course of grilled mackerel in a bouillabaisse foam with asparagus and couscous was the only dish with actual fish in it, and it was superb – everything was in perfect harmony and the light grilling of the fish really helped to enhance its natural flavour.

Before this, proceedings opened with a paper bag of sourdough bread, radishes and sugar snap peas to accompany a Dutch Negroni (The Netherlands arguably being the birthplace of gin). An intermediary course of more peas and broad beans came in a butter bean purée and decorated with nasturtium. You’d think this onslaught of veg would get tiresome after a while, but no. There’s a life-affirming pleasure in eating what you know is good for you, beaming as you sip Pinot Noir in a sunlit glasshouse, being literally full of beans.

For dessert – the only one on offer of course – beautifully macerated strawberries were served with buttermilk ice cream, basil leaves and laced with a little berry branch oil. Perhaps a dish like this, which is great for anyone without teeth, could benefit from a bit more structure and texture. But it was still delicious. A canelé with an espresso was a nice touch too.

And while eating in a greenhouse may be a slightly unusual experience, here you don’t feel like you’re Alan Partridge going to a garden centre. Lunch at De Kas is a perfectly acceptable recreational pursuit. The bill wasn’t bad at all either. Four courses, pre-lunch snacks, a Negroni, two glasses of wine and coffee came to about 70 quid. Not that the benefit of this was really felt thanks to Brexit’s impact on the exchange rate, but it was a lovely thought nonetheless.

I hope nothing, whether it be monkeypox or war, scuppers future travel plans as I certainly don’t want to leave it so long to visit Amsterdam and De Kas again. The locals are lucky to have this place.