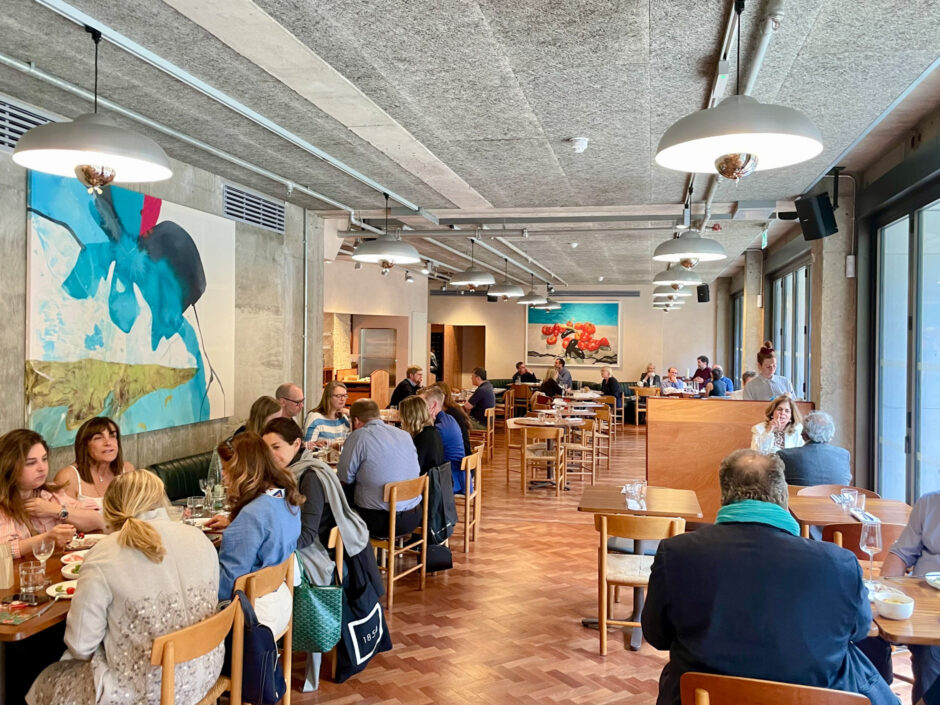 I first stumbled across Toklas on my way out of a fabulous exhibition at 180 Studios, which is also housed in the Brutalist building at 180 The Strand. I didn’t see the restaurant and bar then as they are on the first floor but I did scan the menu displayed at pavement level and make an immediate mental note to book lunch on my next visit.

Consequently, following a visit to their latest (also remarkable) exhibition, I headed up the steps and found myself on a garden terrace larger than most of the restaurants I’ve been to this year. The changeable spring weather was breezy and a bit nippy, so I was quietly content to head inside; however, this looks like a prime spot for the summer. Once inside the building a bar stretches along the wall to the left, with a seating area opposite that at first glance looks disconcertingly like one of those waiting rooms where you have to take a numbered paper ticket. In fairness this was late lunchtime on a weekday, so I’m sure it would be transformed with the addition of a crowd.

Veer right instead and you are in the restaurant: industrial-style designer lighting, concrete walls and a huge Wolfgang Tillmans photograph as a focal point. The cool, arty vibe is unsurprising given that Toklas’s owners also founded Frieze; the restaurant is named after Alice B Toklas, partner of Gertrude Stein and author of the eponymous cookbook containing her (in)famous fudge recipe. There is an open kitchen, which is one of my favourite things as a customer and, I always think, so much more rewarding for the chefs than being locked in a basement kitchen away from the diners’ reactions.

The menu is written daily around the availability of top-notch produce and the light, instinctive touch of head chef Martyn Lyons is evident. Skills honed at Dabbous, Spring and Moro are here given free rein; fresh Mediterranean flavours are carefully balanced and expertly paired but otherwise the focus is on their natural gifts.

I started with a small plate of mozzarella with peas, broad beans and mint. This is the kind of deceptively simple dish I find so very inviting: a base of soft, fresh mozzarella scattered with vibrant, just-cooked peas and beans, the zing of mint, a tangle of rocket and a generous drizzle of good olive oil. Despite a complete lack of artifice it was visually stunning and also bursting with flavour. It’s one of those dishes that looks quite virtuous but is actually chosen through complete self-indulgence. There’s a lesson here somewhere on judging books by their cover. 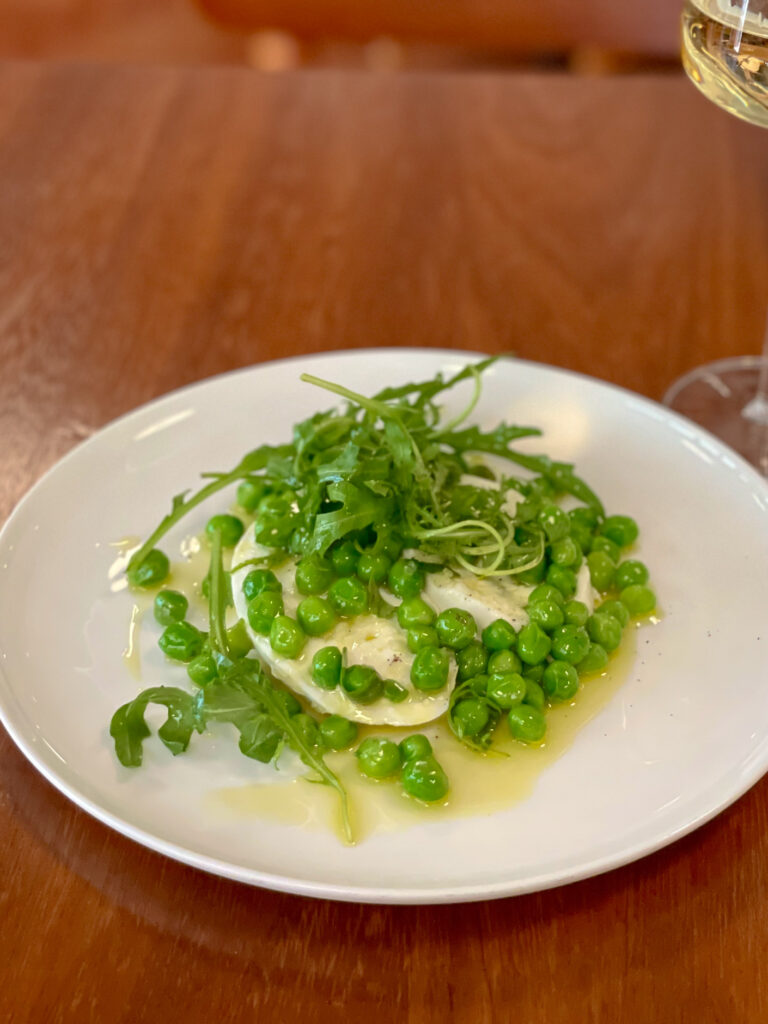 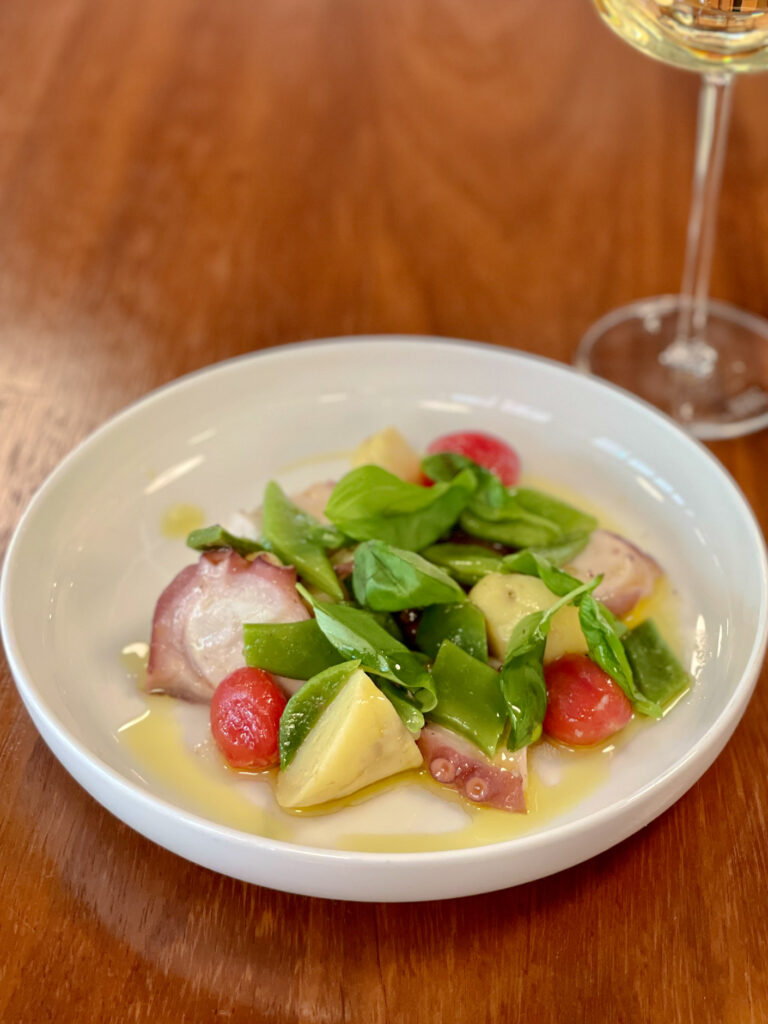 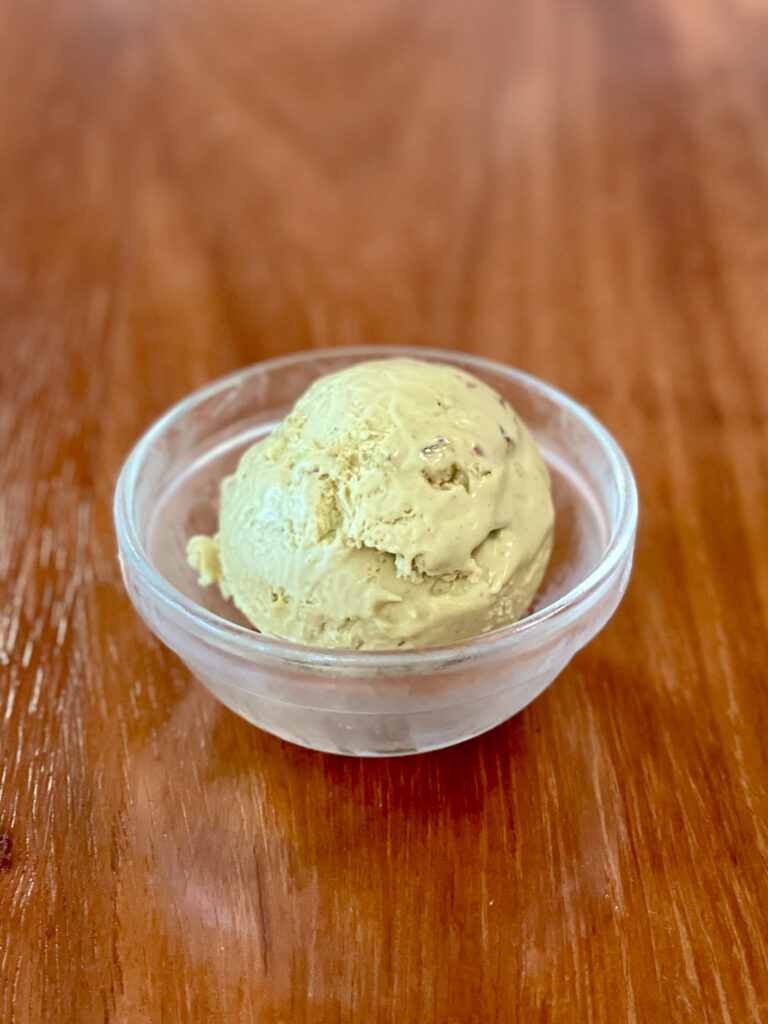 Next was octopus with flat, green piattoni beans, nutty ratte potatoes, a handful of fresh basil and some perky marinated tomatoes which added both acidity and sweetness. This combination was again utterly delicious but also texturally very satisfying; it made me rethink my first dish and appreciate the textures there too. It takes a particular skill to create dishes so apparently artless but actually precise.

Their house-made pistachio ice cream has a satisfyingly dense, creamy texture, studded with waxy nubs of toasty, roughly chopped nuts. It arrived without any adornment but served in an iced bowl, which is all it needed. True to their produce-focused ethos, the purity of the flavour took me back to a tiny, graffitied side-street gelateria in Rome; it was so absolutely, fully pistachio that it could almost have been savoury, which I love.

There is sourdough to take home on the menu but let me give you a tip: decline gracefully and turn left on the street as you leave. Within a few steps you will be at the Toklas bakery which sells not only their excellent sourdough but some divine pastries and a whole range of highly desirable foodstuffs and household items. A vanilla crème pâtissière and tea-soaked prune Danish, or a sour cherry and crème fraîche swirl? If you insist. Run out of Hodmedod’s organic spelt, Greek fava beans, soba noodles or katsuobushi for your dashi? No worries, they’ve got you.

In a recent review of Jose Pizarro at the Royal Academy I considered the convenience of being able to book both an exhibition and lunch together without having to compromise on the quality of either; for me, 180 Studios and Toklas make another perfect pair – and there’s a bakery.